The rigger came last weekend. His name is Mr. Sullivan. He went up the mast in his bosun’s chair [not ours] and confirmed that the inner forestay was OK. That was the second thing that broke on the Bahamas trip. Well the sump pump broke too, but that’s another story (we fixed it, too). So, if we wanted to go offshore again, Juno is ready!

We fixed the windlass last weekend. And if you don’t know what a windlass is, it is the thing which lifts the anchor up. For some reason, daddy kept saying things like “This is so great! We fixed the windlass!” That still isn’t hitting me as he intended because we have fixed so many things before this and they weren’t an important [I assume]. And if you’re wondering how we went on the Bahamas trip without it, I want to inform you that the control box broke on the Bahamas trip (the control box is a thing that makes the windlass work properly). Well, I guess I just have to be proud of myself because there is nothing wrong with that. 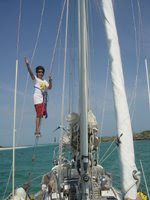 Sailing in the open ocean sounds fun, but it doesn’t always live up to expectations. Take our recent voyage for example, we thought that sailing on the ocean would be easy and fun, but were proved badly mistaken when we got out to sea. The whole boat was pitching and rolling like heck, and both my brother and I were seasick, along with the rest of our crew except my dad.

Maybe I’d better start at the beginning. It was the last day of school before spring break and my brother and I were checked out of school early in order to get to Yulee, a small coastal town near Jacksonville, before dark. Over spring break my dad planned to take my brother and me to the Bahamas, along with some old friends. We owned a 43-and-a-half-foot long sailboat named Juno, which was docked in the little town. We got there around 4:30 and set to work putting the finishing touches on getting the boat ready for sea. We did so, and then cleaned up the boat for our guests. My brother and I went to sleep before they arrived, however.

The next day I woke up to find everyone here and ready to get going. That afternoon we cast off and headed out the St. Mary’s entrance. We got out to sea and – WOW, the seas were HUGE! I had thought that the seas would be pretty small, but I was very wrong. After about ten minutes I got seasick and don’t remember much of the next two days except lying down and upchucking.

I awoke the third day expecting to feel like tossing my cookies again, and lo and behold, I felt like I hadn’t eaten in two days. Seeing as I hadn’t, that was no surprise but the point is I had finally gotten my sea legs, which meant I wasn’t going to be seasick anymore. I had some food and came up on deck to see several islands off the starboard bow. We had finally arrived in the Bahamas, and would spend the next two days and a half catching conch, lobster, and maybe a Nassau Grouper. Relaxation, that’s what we needed, and that’s what we got the entire time we were there.

First we went to Walker’s Cay to clear Customs, which took the greater part of an hour, and once that was finished, we started sailing towards Double Breasted Cays. About halfway there we ran aground on a shallow area. We got ourselves off, and continued on our way. We swung around Double Breasted Cay, motored to a good sandy area, and anchored. We quickly took the dinghy to a rocky area, anchored it, and began our search for lobsters. It was the last day of lobster season, so we had to get them while we could. All we found was a conch, but those are good too, so we didn’t completely fail. We didn’t find anything else the whole time we were there, but the conch was pretty tasty, a little bit tough, but still pretty good.

Eventually we had to pull up our anchor and set sail, but we had a great time in the Bahamas. The trip back was a blast, no seasickness, and we even saw dolphins. Our maximum speed reached eight knots through the water, and twelve knots over land. The reason we went so fast is that we were riding the Gulf Stream, which gave us four knots, and had an excellent wind that was pushing us along at hull speed. Hull speed is the highest speed a displacement boat can travel at without getting up on plane, which is very hard. After a day and a half’s traveling, we arrived back in Fernandina Harbor, from which we traveled to Yulee.

In all, the trip took about nine days to complete. It was a lot of fun, even though I did get seasick. Juno is a good boat, she doesn’t leak much, she has good electrical and mechanical systems, she has a good engine, and good sails. There a few kinks that need to be shaken out, but otherwise she has everything we could hope for in a boat. We had a great time on this voyage, and I hope that our trip across the Atlantic is just as fun.

The ride back was much better than the way there. On the way back, we saw tons and tons of dolphins. They dove under our keel and one of them leaped out of the water. We also saw a tiny bird that stayed with us for a full day. Now, this wasn’t a sea bird like the ones you see at the beach. It was a bird that you would see in a tree at home. It must’ve been there the whole time! He left us and went onto a tanker passing by.
Then, WE FINALLY GOT BACK HOME! When we got there, I played around some, then I got typing on the essay you are reading right now. Now when it comes to looking back at it, it was spring break!

The second day there I also learned that you could dump anything except plastics in the sea. You should have seen it. The water was just so blue and beautiful. We got there at dawn. And I must admit that it was totally shallow (in fact, we ran aground at one point.).

We had such a fun time there. We had (and caught) a conk, I went fishing (but didn’t catch anything) and we went snorkeling. And when we did that, we saw a HUGE starfish. After all that fun we had to leave.