As we set out on our two-year voyage, I couldn't help but think that this will be the last time I see the United States for two whole years. We had taken a last look around the house, and had prepared the boat for sea. Mr. Denis and Mr. Peter (our crew members) had come on board, and we had left the marina without incident. We passed Fernandina Harbor Marina and headed out the St. Mary's Entrance. The water was much calmer than the Bahamas trip had been, and I barely got seasick at all. The next day however, I got seasick. We were sailing along just fine, and then I started to feel queasy. Then I started to feel really queasy. Eventually it calmed down , but for the first few days, I didn't feel so good. For the first four days, the seas were rather calm, and the wind was barely enough to sail by. I thought I had gotten my sea legs I that time, but I was proven wrong on the fifth day. Yep, I got seasick again. To make all things worse, the seas got pretty rough on the fifth day, and the wind rose to 30 knots, whipping up the seas. The boat was constantly on an at least ten degree heel, sometimes reaching a 20 degree one on a big roll. We were slammed from side to side in our bunks, making it almost impossible to go to sleep. We managed though, and the boat performed almost perfectly. It seems that all our 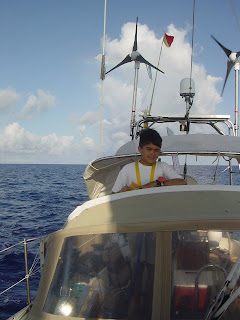