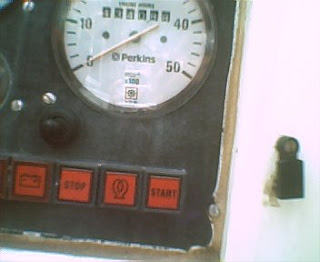 We fixed something else today! This time it was more than a little
doo-dad, we-don't-need-to-do-it yada yada yada. It was the little button
thingy that makes the motor for the boat stop running. Well, there is a
cute little lever that is attached to the motor that can make it stop as
an alternative. But you need to open the engine compartment and expose
the darned, hot engine to turn it off. That is something we do not like
to do. There were only four wires for the glow plug and there were six
terminals on the stop switch. We were switching the two, and Daddy
thought it was hopeless but then I realized that two of the terminals
led to a light attached to the switch. Daddy said that is was a very
good discovery, but I thought is was the obvious. Don't tell anyone
about this, because it is a bit embarrassing when people say "Rigel
saves the day!"
Posted by S.V. Dáte at 1:23 PM